Sunday Sounds: An Afternoon of Gershwin 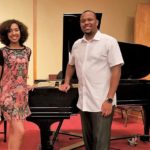 The Scotch Plains Public Library welcomes jazz pianist Gil Scott Chapman on the keyboards and vocalist Lauren Scales for Sing of Spring: An Afternoon of Gershwin. No registration is necessary.

You might remember their performance at Community Juneteenth in 2017.

Chapman is a classically trained jazz pianist from Westfield. He has also performed in many venues around the world including Carnegie Hall, the Kennedy Center, the Monterey Jazz Festival, the Montreux Jazz Festival, and the Detroit Jazz Festival. He helped develop the Gershwin Initiative, a partnership between the Gershwin family and the University of Michigan, where he earned his B.F.A. (Jazz Studies) and Master of Music (Improvisation).

Lauren Scales has been performing most of her life, named the NYU Steinhardt Songwriting Scholar of 2017 and Second Runner Up in the 2016 Sarah Vaughan International Jazz Vocal Competition. She earned her B.M.A. (Jazz Studies) at the University of Michigan and is pursuing her Master of Music as a Songwriting Composition student at New York University. Lauren is currently composing new music with many collaborators and working on her debut EP.