Sholem Aleichem: Laughing in the Darkness

Who could have predicted that a Yiddish writer’s tales of an impoverished Jewish milkman in czarist Russia, reborn as a smash Broadway hit, would become a cultural touchstone of lasting popularity and global recognition into the 21st century?

As we honor Jewish American Heritage Month, Scotch Plains Public Library’s May programs will examine the phenomenon of Fiddler on the Roof from a variety of vantage points. 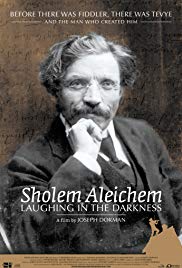 Sholem Aleichem: Laughing in the Darkness (93 min) – This film tells the tale of the rebellious genius who created an entirely new literature. Plumbing the depths of a Jewish world locked in crisis and on the cusp of profound change, he captured that world with brilliant humor. Sholem Aleichem was not just a witness to the creation of a new modern Jewish identity, but one of the very men who forged it.

No registration is necessary.

Plan to join us for these other ‘Fiddler’ programs: