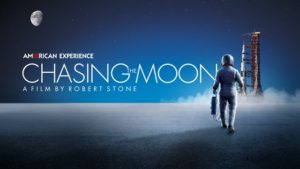 Through a partnership with PBS, we will screen a preview clip of Chasing the Moon, a new six-hour documentary series about the space race, which will premiere July 8-10 on PBS. A short discussion will follow the screening.

Registration is strongly recommended for this program.

Chasing the Moon, an American Experience film by Robert Stone, thoroughly reimagines the race to the moon for a new generation, upending much of the conventional mythology surrounding the effort. The three-part series recasts the Space Age as a fascinating stew of scientific innovation and PR savvy, political calculation and media spectacle, visionary impulses and personal drama.

The film reveals how the drive to land a man on the moon was fueled as much by politics as it was by technology and was a controversial undertaking during a volatile time. The Library preview will bring us back to 1968. In the midst of social upheaval in the US, pressure from the Soviet space program, and the tragedy of Apollo 1, NASA pushes forward in its efforts.