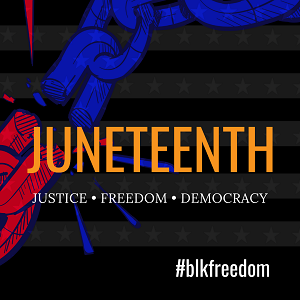 Six leading Black museums and historical institutions from coast to coast are joining forces to launch BLKFREEDOM.org, a digital commemoration of Juneteenth, the day that the Emancipation Proclamation was officially enforced, ending enslavement in Texas.

This timely event, which you can view HERE, features cultural performances from Africa and across America, educational content and appearances by:

The launch of BLKFREEDOM.org will commemorate the 155th Anniversary of Juneteenth, which dates back to June 19, 1865, when union soldier, Major General Gordon Granger, landed at Galveston, Texas, with the news that the war had ended and that the enslaved were now free. This announcement was more than two and half years after President Lincoln signed the Emancipation Proclamation.

Through educational content, artistic performances and shareable discussion prompts, this collaborative program will explore the meaning and relevance of “freedom”, “justice” and “democracy” in Black American life, from a historical and contemporary framework. To learn more and subscribe for updates, visit blkfreedom.org.

We are grateful to PBS Books for giving us the opportunity to share this event with you.